Fishguard is a picturesque town perched above the old harbour. Abergwaun is its Welsh name, meaning “Mouth Of The Gwaun”.

It is the ideal base for exploration of this area of outstanding beauty.

Pembrokeshire has been described as the premier county of Wales & it can make the same claim for its birdwatching opportunities throughout the year.

The town is a hub for a range of buses for walkers to explore The UK’s only coastal National Park.

Cyclists are also attracted to the area’s designated cycle routes.

The town itself offers walkers the opportunity to visit the film locations of “Under Milk Wood” .

The “Last Invasion Trail” relives the sites associated with the last invasion of the British mainland in 1797.

Fishguard’s Last Invasion Tapestry, displayed in The Town Hall, is a “must see”.

Fishguard has recently been called as a “town of festivals” with the following events taking place in 2016 (select a festival for more information): 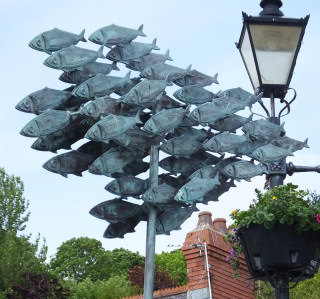